Q&A with Martin Wikfalk, founder of The Mindfulness App

Blank Shores (bit.ly/blankshores) opens with our lead character Emily searching for Connor, her missing partner.  He has suffered from anxiety and depression his entire adult life, leading to feelings of isolation and low self-esteem.  The loss of their newborn daughter, Sophia, pushed Connor over the edge, resulting in a gradual breakdown in communication with Emily.  Rather than consoling one another and healing through honest communication, a distance grew between them. Connor explores an uncertain, and potentially dangerous, means to alleviate his suffering.

Coping with poor mental health is a central theme of Blank Shores, and we want the film to not only entertain and have artistic merit, but also raise awareness and generate understanding and empathy.  We believe the film has the capability to move people and provoke meaningful conversations.

A useful tool and form of non-medical therapy, to help with anxiety, can be by practising mindfulness and meditation.  Although it is a thousand of years old practice, originating from Eastern traditions, it has only reached the Western mainstream more recently through sales of mindfulness books, celebrity endorsement, and the wealth of mindfulness apps commercially available.  To be mindful is to experience the present moment, without clinging to the past, or feeling anxious at the prospect of the future. This is not to be confused with clearing one’s mind, but to focus one’s attention on the now – the sights, the sounds, the smells, taste, and emotions being experienced at the present moment.  Although mindfulness is a simple concept, it can still take people some time to understand as it requires gradual understanding and practice. The use of apps can be very useful to guide individuals through the process as they practice. They are a tool used by millions of people across the globe to help them cope with the stresses and pressures of modern life.

Positive emotions from using mindfulness and meditation have been linked with better health, longer life, and greater well-being in numerous scientific studies.*  One of the most important areas of research has been around the use of mindfulness within the treatment of long-term physical health conditions.  A review of 114 studies found, in the context of poor physical health, consistent improvements in mental health and wellbeing, particularly reduced stress, anxiety and depression where a mindfulness-based intervention was used.**  The number of areas that mindfulness is being applied to is slowly growing. Positive effects have been witnessed in schools, the criminal justice system, pregnancy and the workplace. 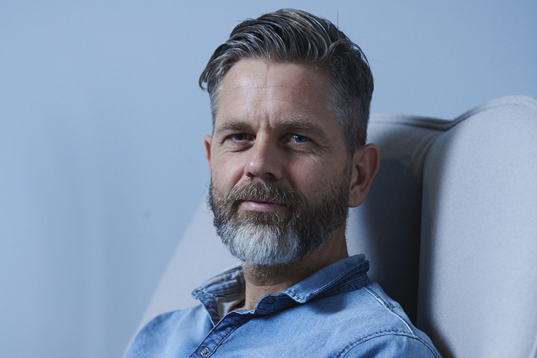 Today we welcome Martin Wikfalk, mindfulness teacher and the founder of The Mindfulness App.  The idea behind the app stemmed from his observations that participants of his courses were finding it difficult to remember to do the daily meditations included in his programme.  As well as offering an extensive number of meditations with world-renowned teachers, the app also includes a reminder function which can be activated on specific times and places. With the support of the app the practice is easily done in the midst of a busy life.

What led you to discover mindfulness and meditation?

I was studying at LSE in London and for me this was a rather stressful time.  I am from a small city in southern Sweden and the sheer size and pace of the city of London itself put pressure on me.  On top of that, studying in English and at a prestigious university added further pressure. I remember having difficulty falling asleep and my heart was pounding hard and fast while I was lying in bed.  My girlfriend at the time introduced me to some simple meditation techniques and I also took private lessons with a Chinese Qi-gong teacher. Later on, when I took my Masters in Washington DC, I attended a meditation group and in 2002 I attended my first Vipassana meditation retreat in Thailand just outside the city of Surat Thani.

How have you found your life has changed since practicing mindfulness and meditation?

What started out as an interest and then a need soon grew to become something more.  Both my wife and I were very interested in meditation and yoga and we had the opportunity to live for 4 years in Myanmar where we could absorb teachings from different Buddhist monasteries.  We also started to take yoga workshops in Bangkok and invited teachers over to Yangon and soon we were teaching yoga classes for the international community there. We later decided to take up a yoga teacher training course and when we moved back to Sweden in 2007, we opened up our yoga studio Bara Yoga in Stockholm. This was a big shift professionally since I had been studying International Relations and worked for the UN and other international organisations.

I find meditation an indispensable tool for coping with the stresses of everyday life as well as more dramatic life changes.  It also helps me to fall asleep faster and improves my quality of sleep. In everyday life it grounds me and helps me make more conscious choices as well as being less reactive to things that can otherwise easily throw me off balance.

What is the success rate on your course for participants’ anxiety levels after learning how to practice mindfulness and meditation?

We did a survey some time ago with more than 1,000 participants and 79% reported that they experienced less worry and 77% experienced improved mood.

What is it about mindfulness and meditation that can help people deal with their anxieties and reduce the negative effects of depression?

There has been a lot of research on this and it is not always easy to find out exactly which component is having the effect or if it is a mix of different components.  Having said that, there is evidence that meditation does cause physical changes in the brain itself such as the increase of grey density matter, particularly in the prefrontal region and improved connections between different parts of the brain. Through mindfulness meditation we learn how to be present in the moment, and discover a different perspective in how we engage and interact with the world around us.  Mindfulness also teaches us to take our thoughts with a pinch of salt so that what we used to think as reality can now be seen for what it is, just a thought. This can have a huge effect on how we relate to our thoughts and reduce the tendency to ruminate over the past (a common trait of depression) and worry about the future (a common trait of anxiety).

Do you believe practicing mindfulness and meditation could reduce the need to take medication for those suffering from anxiety and depression?

I believe that it really depends on the person as well as what type of anxiety or depression they have, what has been the cause of it, and in which stage the person finds him- or herself.  There has been research showing that mindfulness has been at least as effective as medication in preventing people to relapse into depression. Also, the medicines that are used for depression and anxiety are not effective for everyone and for these people mindfulness might be a very good alternative.  However, like medicines, mindfulness is not a panacea or a solution for everyone in all circumstances. For some it can be very debilitating being alone with their own mind for an extended period of time. I think it would be fantastic if everyone has the option to see a psychiatrist or try mindfulness before being prescribed drugs.  In some cases, this will be sufficient, in other cases medicine might need to be added as a complement or substitute.

Are there other situations where mindfulness and meditation could be of benefit?

I believe that mindfulness can enrich all parts of life and for someone who does not suffer from depression or anxiety it can reduce stress, improve focus, sleep and relationships.  So for these people it can lead to an increased sense of well-being and feeling alive. It does not necessarily mean that you have to sit down in a cross-legged position to do a formal meditation.  Many people already have their own ways of being in the moment, for instance by being in nature, doing physical activity, enjoying a cup of tea or listening to music.

Do you have any news or exciting announcements you would like to share with our audience about your work and/or mindfulness and meditation?

We have recently started an initiative to spread mindfulness to children and teens.  For us it boils down to what skills we want the next generation to have with them as they leave school.  It is, of course, great if they know facts and can reason but I also think it is important to give them the skills to deal with their thoughts and emotions, to develop empathy and learn how to relate to others in a good way.  The ambition is to create a sustainable solution for schools that make it easy to integrate the mindfulness training into the general teaching so that attention training becomes a natural part of school work. The children will be equipped with skills that help them both in school and throughout the rest of their lives.

You can download The Mindfulness app from AppStore or Google Play